Although, from the usual conditions, it may seem otherwise, the short answer is yes, term insurance policy covers natural death. If you are familiar with the term insurance conditions, you would think that this is not possible under a normal term cover.

Under normal circumstances the term insurance covers all types of deaths that might fall under Accidental, Illness Related or Natural death. While all of these are natural causes of death and can cause significant financial distress to the dependents and family.

Thus, term insurance certainly helps in these cases by providing the money family needs to meet their life goals and needs. But it does not cover all conditions of the death that may happen under these heads.

Which Deaths Are Not Covered by Term Insurance?

Apparently, a basic term insurance covers a few specific types of deaths. Although the broad categories seem clear enough, the situations leading to death will differ every time. Thus, classifying the cause of death between covered and not-covered sections.

Accidents on the roads cause more than 1.5 lakh deaths every year in India. If someone happens to have a term insurance cover and meet with a fatal accident, the policy will cover their death, provided they were not:

Apart from these, term insurance will also not cover the deaths happening due to war, terrorist attack or any other form of declared or undeclared foreign attacks.

2) Death Due to Illness

Term insurance covers the demise of policyholder (or the person insured) Illnesses leading to the untimely demise. However, you must ensure full and true disclosure about the health of the insured while filling the application form.

Insurers can reject the claim if the insured did not declare the health condition or habits which are harmful to the health at the time of purchasing the policy. Further, the term insurance will not cover the death under the following conditions:

Is Suicide Covered Under Term Insurance?

As per the term policy conditions, death due to suicide is not covered within the first 12 months of the policy tenure. However, the insurer may return up to 80% of the premium received for the cover.

For the period after the 12-month limit is over, we should look at other conditions under accidental and illness related deaths. 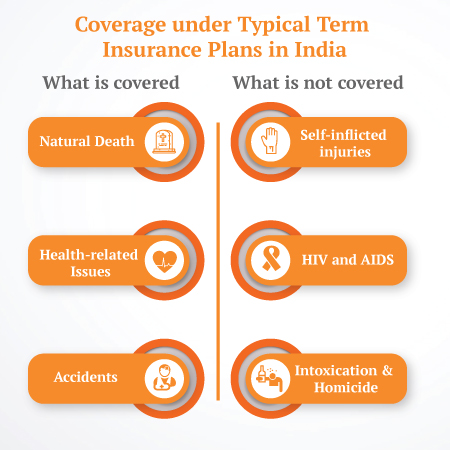 How Does a Term Plan Covers Natural Death?

However, iSelect Star term plan can provide a whole life cover up to the age of 99. That means, even if you are 30 years of age, and buy a term cover for 99 years, you are very likely to incur death claim on the policy.

In other words, your family will receive the death claim benefit, even when you live a normal life and only die of old age. So yes, modern term insurance plans do cover natural death.