What happens if the nominee dies in term insurance plan?

Here we try to clear the air on the situations like given below for term insurance policies:

Nomination in a Term Insurance Plan

You may have often heard the term “nomination” that is widely used in Banking, Finance and Insurance. The definition, however, varies across sectors and asset classes.

To avoid disputes and reduce any stress for the family, it is best to treat nomination seriously and update it as and when required. The money should go to the people who need it most when you are not around. Ergo, mentioning the beneficial nominee’s name is quintessential.

Learn how to choose a nominee for your term plan.

Can you Change Nominees in Term Insurance Plan?

Changing nominees is very much possible, but the latest beneficial nomination will supersede and all older nominations will become null and void.

Robin had taken up a term insurance policy at the age of 28 when he was unmarried. He had nominated his 57-year-old father to receive the Sum Assured in case of Robin’s demise. However, he forgot to change the nominee details even after getting married or after his father passed away.

Nominee details should be accurate to avoid legal hassles for your family that will already be devastated because of your absence. Incorrect details will only add to the trauma and make them run pillar to post.

Who Can be a Nominee?

If there is some financial dependency, that should be proven, failing which the insurance company might sense a moral hazard and refrain from issuing such a policy.

Children too can be appointed as beneficial nominees on term life insurance policies. After all, in many cases, one of the goals of term insurance is to secure the children’s future and support their aspirations to study and become financially independent.

However, children below 18 years of age are minors and are legally not allowed to manage money. A guardian, called custodian or appointee is necessary until the children turn 18. Ergo, in such cases, the claim amount is not directly paid to the children and paid to the guardian instead.

Distribution Of Benefits in Case of No Nomination

In case the policyholder has not nominated anyone in his policy, there is an established legal procedure that the insurer follows to avoid any legal disputes in future. The insured’s spouse, son, father or mother, classified as Class I legal heirs are (in that order) first entitled to receive the claim amount. 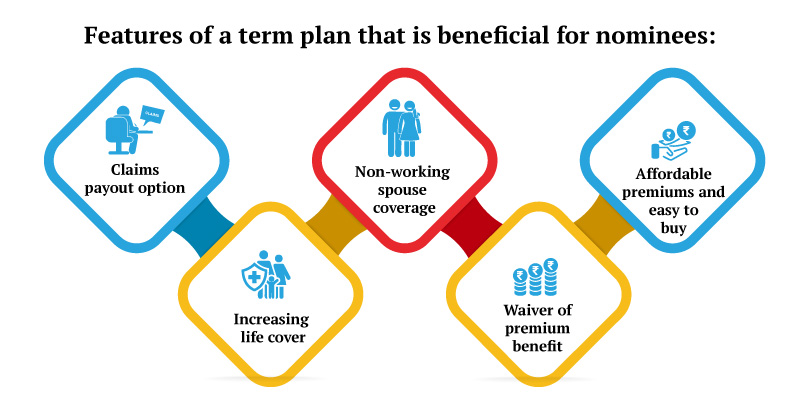 If the insured has left a will, then the distribution will be as per the Indian Succession Act, 1925, after the court issues the succession certificate and the insurer indemnifies itself against any disputes.

Nomination in Policies under MWP

Suresh, a 38-year-old proprietor, is in a major dilemma. He has raised several loans to expand his business. He has recently parted ways from his brothers and is doing reasonably well. He wants to avail of term insurance of at least Rs.1Crore to financially safeguard his wife and two children in case of his demise. But he is anxious about his estranged brothers and/or creditors who may stake a claim on the insurance money.

The good news lies in the policies signed up under Married Women Property (MWP) Act, 1874, that permit adding only Wife/Child/Children as beneficiaries/nominees. A policy, under MWP Act, cannot be attached by law for repaying creditors. In case of demise, the Sum Assured is paid only to the wife or children.

The Need of Term Insurance for A Family

Yesterday is History and tomorrow is Mystery; All we can do is live in the Present!

Suraj was born and brought up in Begusarai, a small town about 100KMS from Patna. He lost his father at the age of 7 after which his mother, a high school dropout, struggled to make ends meet. Suraj had to drop out after Class 12 and take up odd jobs to support the family.

With grit and perseverance, he has done reasonably well in life and is now settled in Hyderabad. When he connects the dots of his life, he wonders whether life would have been better if his father had signed up for a Life Insurance Policy?

Term Life Insurance is not just another policy. It can define a life. Term Insurance Plans are Plan B for your life. It is a hedge against tomorrow’s uncertainties. It is a guarantee that your spouse and child/ren will not suffer financially if the almighty calls you back too soon. even before your fledglings are old enough to earn and survive in this world.

Term Insurance creates a financial cushion, generally up to 15 times your annual income, for your family to meet expenses and sustain for the next two decades or more depending on the lifestyle expenses. Besides the corpus can be invested in income/interest generating assets to sustain for a longer time.

For example, the iSelect Smart360 Term Plan, offered by Canara HSBC Life Insurance company, not only covers your life, but also that of your spouse for a slightly more premium. This works out to be very cost-effective as against buying two policies.

Know All About Nominee For Life Insurance Plan