What are mortality charges in ULIP?

Radha, a thirty-seven-year-old marketing consultant, decides to buy a 10-year ULIP. The premium paid was 10,000 per month, and the ULIP returns capped at Rs.12,00,000, which is ten times her premium. The amount to be paid during the sudden death of Radha is higher than the assured sum and the value of the fund.

This is how mortality charges work in ULIPs; they double as life coverage.

The ULIP mortality charge calculator follows a stringent formula. The charge is calculated per 1000 of the cover, depending on the type of ULIPs, location, and financial conditions of the policyholder as risk factor.

As of now, the mortality rate is sourced from the revised Indian Assured Life Mortality Table 2012-14, published by the Institute of Actuaries of India. The mortality charges are calculated in accordance with the prescribed data recommended by IRDAI, according to this formula: 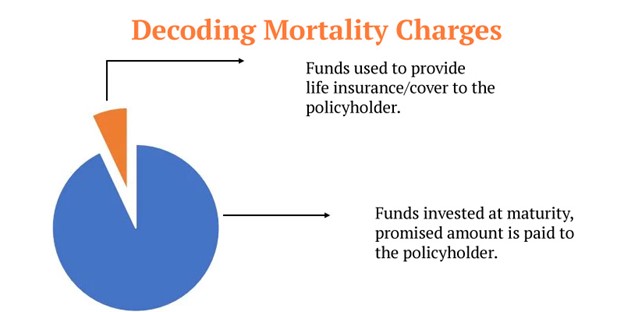 The mortality charges in ULIP depend on a number of factors, like age, gender, and health.

The mortality charges incurred by a young person are much lesser than those incurred by an older individual. However, the ULIP for adults cannot be confused with child ULIPs that usually have a higher mortality rate, particularly for children between 7 and 14 years.

Yes, Invest 4G offers return of mortality charges. The main concern of ULIPs as an instrument for investment is the added charges. ULIPs acts as both investment and insurance, which can be a deterrent.

The bank will pay an amount that is equal to all the charges deducted during the term of the policy, added to the fund value upon the policy’s maturity (provided every premium payment has been paid without delay and subject to certain conditions. This makes Canara HSBC Oriental Bank of Commerce Life Insurance ULIPs like Invest 4G a more convenient investment option, provided you are not discontinuing the ULIP policy.

Apart from the return of mortality charges, Invest 4G Plan comes with additional perks like:

Now that we have explained how mortality charges worked, it is obvious that ULIPs, where mortality charges are returned, is an ideal investment option that allows you to save a considerable amount of money while enjoying perks like tax deductions and fund management.

Know why ULIPs do not invest only in equities

What is the sum assured in ULIPs